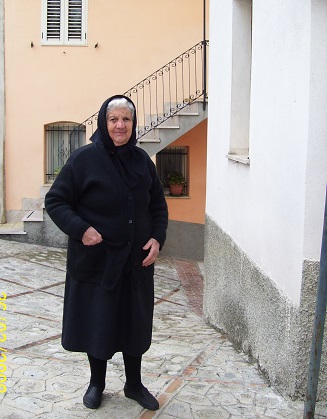 The official language in Calabria is Italian, however there are many people who speak Calabrian and the ancient Greek language. This can vary greatly from village to village and depending on where the people live in Calabria. Inhabitants living in northern Calabria usually speak a mixture of Italian and Neapolitan dialect as they are closer to the Campania region. Those living in southern Calabria use many Sicilian words.

Those who live up in the mountains in Aspromonte and villages such as Condofuri, Roghudi and Bova speak Greko. This language resembles the ancient Greek language. The locals who speak this language are very proud of their origins, but Greko is slowly going into decline. There are some individuals who are trying to save it. You can read the article here.

Many young people want to speak Italian and in fact, most people do. However, there are still many families who insist on speaking dialect at home and with friends. It is completely different from Italian, although they still use the odd Italian word which you can easily catch. When they use the ancient Greek language, it is very different.

The Italian language in Calabria

When they speak amongst themselves, it can be very difficult to comprehend. I have noticed though that they will speak Italian with visitors. My experience living many years in Naples and Sicily has helped a lot when they speak in dialect. I am surprised how many words I can understand. It is when they start putting in Greek words, I am at a loss.

Calabrian is not an easy language to pick up. They also have a heavy accent in some parts of Calabria which does not facilitate one’s understanding. Calabrians will gladly speak Italian to visitors and of course, not all Calabrians use Calabrian. They also speak English, especially Italians who spent many years in America, Canada and Australia and decided to come back. You will find many of them in every town in Calabria.

They love it when they see foreigners wandering around trying to find a place or communicate with the local people. They are always ready to help out with the language. Most people along the coastal resorts speak English. The problem is when you have to go up into the mountains, you may need a translator. I remember getting lost up the mountains and trying to have a conversation with an old lady.

We did not get very far except for the good old hand signals. Calabrians are very expressive when they communicate so you can understand something from their facial expressions and hand gestures. Read about the medieval villages of Calabria in my earlier blog post

Most people, especially the elderly who live up in the mountain villages find it difficult to speak Italian. The reason could be that they were cut off from larger towns where there were more services in the area. Some of them were not able to continue their education. Now there is no excuse with online learning.

If you are curious about learning some words in Calabrian or the ancient Greek language, the best way to learn a few Calabrian words is from Calabrian poems. Some of these poems have been translated into English and Italian.

The local people like when you attempt to speak their language, be it Italian or Calabrian. If they see that you do not know a word, they will try their hand at speaking English. All young people learn English in the schools from the age of 5. With all the resources now, it should not be too difficult.

I remember a family giving a 3 year old kid a mobile phone with English cartoons. Surprisingly, he was able to say the numbers in English but not in Italian.

Teenagers think it is cool to mix some English words along with the Italian language. Some will try to speak a little English. There are of course those who can hold a much longer conversation. More and more people want to learn English.

Going back to Calabrian, some young people refuse to speak it. It is compulsory to speak only Italian at school.

If they do not speak Italian correctly, they may have problems when moving to northern Italy. Many of them move there to look for work after their studies. The elderly and some other people refuse to speak Italian and want to keep their Calabrian language and roots alive.

There is even a school in Calabria that teaches Calabrian. It is not an official language such as Neapolitan or Sicilian, it is only a dialect. The sound is slightly different to Neapolitan and Sicilian. It sounds much quieter and a pleasure to listen to.

Greek influence in the language

Sometimes you think they are stuttering when they pronounce some words. The letter H is so aspirated, it sounds almost Arabic. Many settlers from foreign lands settled in Calabria and this has had a heavy influence on the language. Some people continue to speak their local dialect and many others Italian so Calabrian and Italian are mainly spoken.

Try to learn some Italian when you come to Calabria. Calabrian even better but if not, do not worry, you will find many who speak English. More and more English speaking visitors have discovered Calabria so you will see that you are not alone.

Calabrians are also very patient. They will make the effort and try to understand you even if it may be with hand signals and gestures. The smile on their faces will say it all as in my feature photo.

The old lady was so happy to communicate with someone even if we didn’t really understand each other.