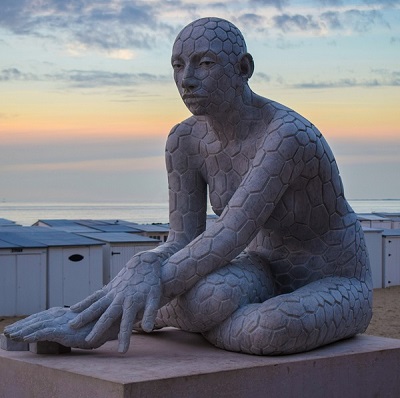 Mosaics are everywhere in Italy and no less in Calabria. Some date back to the Greek and Roman period where you can still see part of mosaic floors in some of the ruins of Greek and Roman dwellings such as the impressive Roman villa in Casignana. You will also see mosaics completely intact on walls and some in museums for example, the dragon of Kaulon in the museum of Monasterace, one of the most impressive and important mosaics in Calabria. Watch the video to see this incredible mosaic.

Some even date back to the Byzantine period where mosaics were used to adorn temples and then later on in churches and noble buildings. You will find below some of the most interesting mosaics in Calabria:

The monastery of Santa Maria del Patire in Rossano

The Roman villa in Casignana

Mosaics in the archaeological site of Locri

The modern mosaics of Rabarama in Reggio Calabria

The list is endless but these are just some of my favourite ones.

With so many mosaics, it is no suprise that I took to the art of mosaic-making. After a few tutorials, I found some old broken tiles. I smashed them into pieces and with a special mosaic cutter, I started to trim the edges so they would fit into the frame I bought. I simply bought a frame with a picture, discarded the image and used that for my board.

I then decided to call it “Southern Italy” and used colours to represent the symbols of Southern Italy. Red for wine, orange and yellow for the sun, green for nature and blue for the sky. I then placed a Sicilian head in the middle of the picture.

This head had lemons for hair. It is quite eye-catching. I then put it above the kitchen hob so I could use it as a mosaic tile backsplash and could not believe how much colour and brightness it gave to the old clinical tiles.

In ancient times only rich people could afford to have mosaics. The masters of mosaics were often called on site in churches, noble buildings and luxury villas to create beautiful mosaics in their state rooms. There are many art schools and classes in Calabria to encourage the students to continue this skilful work.

We can also see modern mosaics designed by a young artist along the promenade in Reggio Calabria called the Rabarama statues. They are huge in size and are giant life-like sculptures done with mosaics. Everywhere you go in Calabria, you will see modern and ancient mosaics. Each mosaic tells a story.

It is no surprise that the ancient Greeks depicted a sea dragon in their luxury dwelling in Monasterace. It is housed in the museum of Monasterace on the Jasmine Coast. You can see this museum in the video above. It is also well worth visiting.

Opposite this museum, you will see the archaeological site Kaulon, which is still being excavated. Part of this ancient Greek city is underwater. You can combine your visit to the museum with this extraordinary site. Most of the objects from the luxury villas of that period are in the museum.