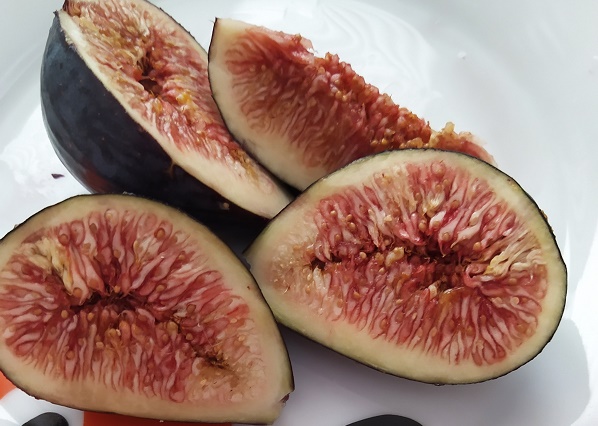 Figs are another link to Ancient Greek civilisation in this part of Italy. These little fruits played a very important part in the diet of Ancient Greeks and also today, but when they understood how easy they were to grow in southern Italy, they started planting them everywhere. These fruits represent southern Italian culture. You will see green and mulberry-coloured fig trees all over Calabria, Sicily, Puglia and other parts of southern Italy. Sorry if I can’t mention them all.

We cannot help but gaze at their immense beauty. These little purple and green fruits hang so neatly from the bright green branches of this magnificent tree. Known as the sacred tree in Ancient times, it was a symbol of peace and prosperity. It is no wonder that they were not allowed to export them in that period.

The production of figs in Calabria

They grow very well in southern Italy due to the hot climate in the summer and the rich soil. There is one area in Calabria that produces alone 800 tons of dried figs a year. That gives you an idea of how many figs are available not to mention Sicily, Puglia and other parts of southern Italy. Apparently you only need to throw a half-eaten fig in the soil without even digging a hole and over time, you can see the tree grow.

But what happens when the branches of that tree start drooping onto public roads, you can imagine all those years of hard work waiting for it to produce its first fruits is completely lost, that is if you are not lucky enough to have your own private garden. It can take between 2 to 6 years before the tree produces its first fruits.

But you are not the only one who has been keeping an eye on that tree. Several people or the neighbours are at the ready with their advanced fig picker tool, in the form of a very long pole with steel-like fingers, able to pluck them off there and then. I suppose it is better than climbing up the tree and making it very noticeable to all.

If you are going to grow fig trees, make sure you plant them in the right spot. Their roots go deep down into the soil and their branches spread out in all directions. These trees can reach up to 9 metres in height. Figs are very precious in southern Italy and delicious.

The green ones tend to be plumper than the purple ones. The heavier the fruit, the riper it is. Learn more about how to grow and care for fig trees here.

Why is it we like figs so much? Could it be because the fruit contains over 55% of natural sugar, high in antioxidants as well as containing vitamin B1, B2, potassium, iron, calcium etc…. . That’s right. They are very sought-after. It’s not only beings who are after those fruits, it is the main source of food for some creatures and birds, but for people, this could be another of these secret ingredients which makes southern Italians live longer.

Some of them live up to the age of 100 and over and still look young. I’m going to make this part of my daily diet.

These little fruits are like the flowers of life. It’s incredible when you bite into them, you can feel all these little edible seeds on your tongue dissolve, almost like that childhood sweet, star dust, only that it doesn’t pop but instead leaves you with that pleasant sweet taste. Southern Italians make everything out of them from fig jam, granita, cakes and biscuits to eating them whole, fresh off the tree and dried.

Dried figs all year round in southern Italy

The fruits are usually ripe in August and ready to pick. They then cut them in halves, but not completely. They leave part of the fig whole so they can stuff them with toasted almonds and close them pressing down lightly with their fingers to seal them. First they have to leave them out in the sun to dry for 3 days turning them occasionally. Some people then bake them in the oven for 10 minutes.

Once they are dry and filled with nuts, almonds or lemon peel, they can preserve them in jars and use them throughout the winter time. The secret is to put bay leaves inside the jar. They can then last up to a year. They eat figs all year round. This is why many of the Christmas cakes and biscuits contain that wonderful ingredient. Dried figs can be expensive so many grow their own trees. Of course, this depends on space and location.

I would like to share with you the story of our solitary fig tree which sits in the corner of the communal car park. Apparently this tree existed well before the place was built. Some of its branches hang onto one side of a public road, the other we are able to pick them. We all have to be quick to take possession. Luckily, the tree produces many of these mulberry-coloured fruits but sadly everyone knows about this tree, including the people who live opposite and in my block of flats.

I usually get my husband to climb up with a sweeping brush who gently shakes the branches and then there is me standing beneath it with my hands stretched out hoping to catch at least one or two. To be honest, there are never many left. I have attached a picture of the two figs I proudly caught the other day.

Going back to the story of the half-eaten fig, my husband threw it in the soil when he realised it was not ripe enough so due to this, we will have another fig tree, but probably by the time it produces fruits, we will have moved on. At least the residents and the neighbours can reap the benefits of that half-eaten thrown away fig.

The local people are happy for tourists just to pick one or two but not too keen when they see people armed with buckets and fig picker tools. All in all, You will love the taste of the figs in southern Italy. Just eating them whole is a culinary experience. The skin and seeds are edible. Eating figs is definitely southern Italian culture and there is no lack of fig trees. Almost everyone grows a tree in their garden. You can read about my earlier blog post chili peppers in Calabria. Subscribe to receive new posts.