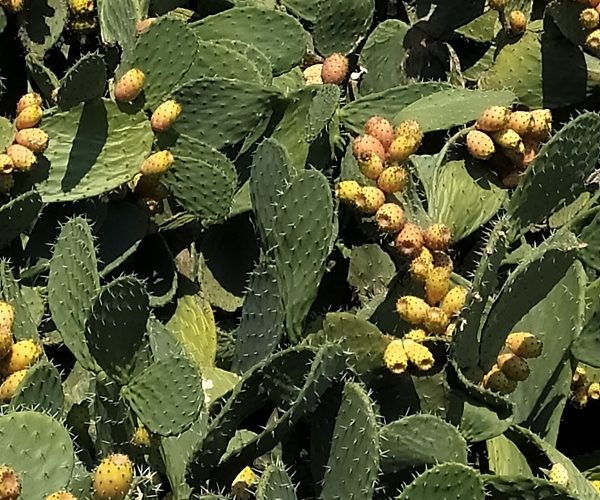 Did you know that giant cactuses with fruits are everywhere in Sicily and Calabria? Translated as Indian figs or prickly pears. This majestic plant is another of these magical shrubs. It instantly catches your eye, even from a distance. The symbol of Sicily and Calabria. The queen of the most typical vegetation to be found in the South of Italy.

This part of Italy is an ideal climate for the plants as they need a high temperature to grow well. The summers are very hot and dry in Sicily and Calabria with mild winters. The shrubs thrive in these regions.

The land in Calabria and Sicily

The vegetation is incredible in this part of Italy. These cactus fruits grow wild all year round and hardly need any water or care to survive. They look like they should be in Mexico or Texas. Did you know that this cactus with its oval-shaped fruits originated from South America? They were brought to southern Italy and took so well to the rich soil that they spread like wildfire. They are everywhere.

Many people in Calabria and Sicily live mainly off their land and in the past, they could only do this, especially if they were high up in the mountains. They learnt how to survive with what the land offered them. This is also the case when many moved to America, Canada, Australia and other countries. See more on immigration here.

Agriculture in Calabria and Sicily

The main economy is agriculture, it isn’t difficult to understand why when you see fields and fields all over the regions of Calabria and Sicily and other parts of southern Italy. Fields with rows of vineyards, fig trees, oranges, lemons, tomatoes, bergamot, liquorice and many other weird and wonderful fruits.

Most people who own a garden grow fruit and vegetables and others have a plot so they can grow everything. My Sicilian mother in-law has her own plot and quite often we have to help with picking olives and lemons. She usually picks the cactus fruits. I, on the other hand completely refuse to pick them and I will tell you the reason why later on in this post. Read more about owning land in Calabria here.

The character of the people vs the fruits

These prickly pear trees are never set out in a neat and orderly way like the olive trees or the vineyards. They can be anywhere and grow randomly. Working the land is not always easy for the farmers. At times, they may even have to grow smaller crops in some areas. This is due to the lack of water in some of these dry locations such as Selinunte or the crops might grow on the mountainside.

This is often the case in Calabria. You can see terraces cascading down the mountainside. Going back to the prickly pears, these particular cactuses with fruits resemble the character of the local people in Calabria and Sicily; determined, hard working, colourful and robust. In fact, the fruits besides being colourful and robust, are difficult to pick. The locals know best. There is an art to removing the skin and peeling them.

My experience with cactus fruits

Never pick the fruits off with your bare-hands. It is extremely painful. I have experienced this. I would like to share with you how those spiny fruits fell into my hands, literally. Many years ago back in my younger days, a few kids decided to play a joke on me. Knowing I was foreign and would not have any knowledge of this fruit, they asked me to catch it.

As soon as they threw this spiny piece of fruit, I leapt up into the air to gladly catch it. I cannot remember how they picked it up but You can imagine how I screamed. My hands hurt for at least a few days, no matter how much I washed them. The spines from the fruit was like removing splinters. These wretched kids could not stop laughing. Needless to say I wasn’t.

How to pick, peel and eat prickly pears

My advice is to never pick them no matter how attractive and tempting they look. Of course, the locals know how to handle them. You need gardening gloves or a long stick resembling an unusual fruit picker. Most of these pickers are handmade. One type looks like a beer can at the end of a very long stick.

I often see an elderly man with one of those and he just places it on top of the fruit and then drops it into his bucket. Another type is a long stick with four parts of it cut at the end so it can grab the fruit. Some people use leafy branches to sweep off the spines.

In this way, they are able to handle them. The cactus fruits are another secret of staying young. They are full of antioxidants, vitamin c and contain other beneficial properties.

Some people use tongs at the table. You can also use a fork to stab the outer skin and carefully peel the skin with a knife. Once the skin is entirely removed, you can then eat the fruit. The taste is not what I expected. It tastes more like cucumber. My mother in-law puts a little balsamic vinegar on them, but most people eat them just the way they are. It’s better to slice them.

Marzipan fruits include the prickly pears

They certainly look very colourful in any fruit bowl, you will find they are in green, orange, dark red and yellow colours. Sicilians always include them in their typical sweets “marzipan fruits”. They really resemble the Indian figs. I personally, think the ones they use with almond paste taste better.

They are the symbol of southern Italy. Some of them are huge, especially the Sicilian ones. They can be just as tall as an average height person. Read more here on how to grow them.

The antioxidants in prickly pear fruits

They are usually picked in August although, they can be picked several times a year. The reason people prefer August is that they can be very refreshing as fruit or in salads. My mother in-law eats them like there is no tomorrow. Her secret is that she wants to stay young. For someone who is 65, I would say she looks about 50 so there must be some truth in these sought-after fruits.

Some people make granita with them or ice cream. You can add them to salads. They are made in lots of different ways. These plants need a lot of space. The actual plant has huge branches, which are called pads. You can see spines all over them. The same applies to the fruits they form. They can take up a lot of room so I don’t think I would put it in a garden.

Of course, this depends on how big the garden is. There is certainly plenty of agricultural land in Calabria and Sicily for them. It is a majestic plant. The bright green colour is evergreen. It does not matter what season it is, you can always see them. They are just as popular as the chilli peppers in Calabria.

The symbol of Calabria and Sicily

You will find this symbol on postcards, souvenirs and other types of tourist merchandise. Once, I saw a print of it on a T-shirt. I was tempted to buy it. It is one of those fruit trees that you cannot help falling in love with. Why do we like these fruit trees? Could it be because they are perhaps, non-existent in some countries, especially those with low temperatures.

We even get our photos taken with them. You can see mine above. They look very colourful in photographs. I was wearing a yellow-green dress so I almost blended in with the plant. The high temperatures in Calabria and Sicily as well as the rich volcanic soil make everything grow well.

A great way to see this vegetation is by staying in a farmhouse both in Calabria and Sicily. See more here. It is an amazing experience. You can use my travel resources here to get around. Find out also about the excursions you can do in Sicily and Calabria here.